This post is about food options for Super Bowl Sunday and is sponsored by Whole Foods Market, a re-occurring sponsor of The Spicy Bee. While I was compensated to write about their special offers, the thoughts are still my own. The recipes in this post were made by me and provided with permission from Whole Foods.

I love having an excuse to make my 7 Layer Dip–it’s nothing too special (which I guess is why I’ve never actually posted the recipe!) but it’s simply delicious and is always a huge hit when I bring it places. This Super Bowl though, I wanted a challenge. As emails started going out last week for dip options for Super Bowl Sunday–I decided it would be neat to try my hand at a few new recipes. It is probably good to note now that I don’t plan on being present for the Super Bowl this Sunday because I will be spending the day on the Oregon coast with friends, but I still wanted a get-together! So I threw a Mock Super Bowl Party Friday night! I picked up a bucket of assorted wings from Whole Foods (I got some Hawaiian Drummettes, Honey Sesame, and Buffalo Chicken wings) as well as a few avocados and some Neufchâtel cheese, and other fixin’s for an evening with friends.

They were a big hit! Since we didn’t have a game to watch, we chowed down to a movie instead. I snacked to my heart’s content! I ended up making two different dips and my traditional guacamole in addition to having some ranch and blue cheese for dipping the wings.

Just in case you’re still drafting ideas for your Super Bowl Sunday–here are some recipes to pin for later!

In a food processor, combine cheese with peppers and adobo sauce until thoroughly combined. This will probably require scraping down the food processor bowl sides a few times. Pulse in the cilantro and green onion until combined.

Recipe provided by Whole Foods Market and can be found here.

Heat a small skillet over medium-high heat. Add jalapeños and garlic and cook, shaking the skillet often, until tender and blackened on all sides, 4 to 5 minutes. Set aside to let cool.

Seed and stem jalapeños then transfer to blender along with garlic. Add avocados, lime juice and salt and puree until somewhat smooth. With blender still running, slowly drizzle in about ½ cup water. Continue to puree until smooth and creamy. Transfer to a bowl and serve.

Recipe provided by Whole Foods Market and can be found here.
—

Remember to grab some wings this weekend for the big game! I bought them ahead, popped them into the oven for 10 min and plated them–they reheated quite well. 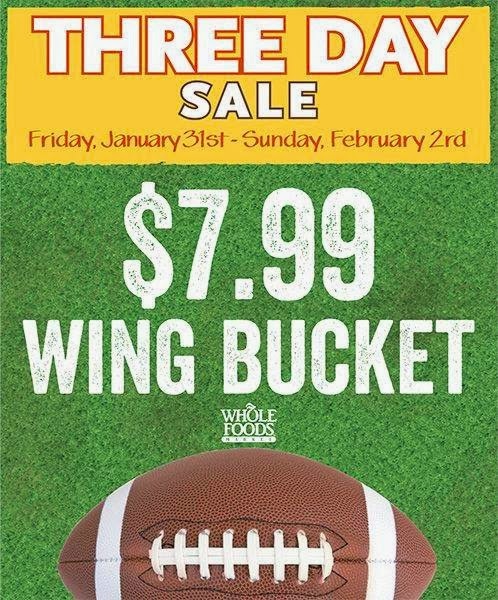 Who are you rooting for on Sunday?

Hi! My name is Bee. I am a health conscious, adventurous food writer from Chicago. I reside in Portland, OR.

This site uses Akismet to reduce spam. Learn how your comment data is processed.

Made with in Portland, OR